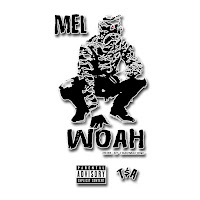 Mel's latest single titled Woah, produced by Trauma Tone. After the release of his debut EP, #NeverStopped, which was hosted by the legend DJ Michael Watts, Mel is continuing dropping bangers which are more up pace than usual. Be on the lookout for more releases from this hard working artist out of West Texas Twitter: @TheOfficialMel_