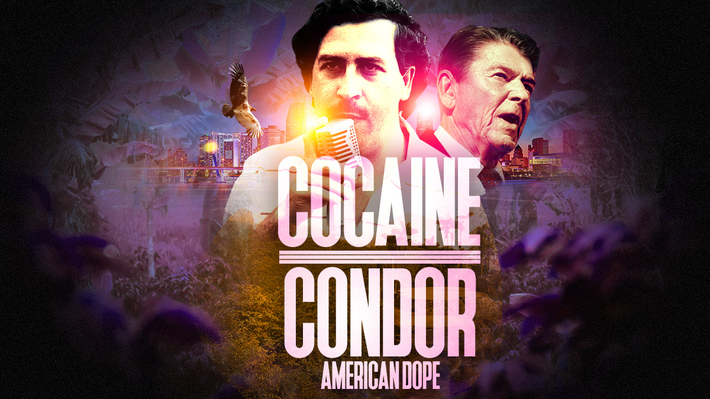 Profit has released the fourth episode in his "American Dope" series! "Cocaine Condor,"  fearlessly unhinges and exposes the role of the American government in the illegal trade from the 1930's to present. "Cocaine Condor" will be available as a free 24 hour screening on Friday, September 13, 2019 on Youtube on Profit's channel at http://www.Youtube.com/alprofit, in recognition and support of National Recovery Month. The series is available now on Amazon Prime Video.
Los Angeles - Brazen filmmaker/ director Alan Bradley, better known as Al Profit, has written, produced, directed and edited a dozen explosive documentaries uncovering the most infamous crime conspiracies, including "The Frank Matthews Story," "Killing Jimmy Hoffa," "Motown Mafia," "Rollin'," and "Streets of New York." His most recent contribution to the culture, "American Dope," currently available for viewing on Amazon Prime Video, is a culmination of his in-depth study of the drug game on a global level. A seven-part series consisting of full-length documentaries, Profit has released the fourth episode, "Cocaine Condor."  This fourth installment of the "American Dope" series fearlessly unhinges and exposes the role of the American government in the illegal trade from the 1930's to present.  "Cocaine Condor" debuts on Amazon Prime Video on Friday, September 13, 2019. Profit is also offering a free 24 hour Friday the 13th screening on his YouTube channel at http://www.Youtube.com/alprofit in recognition and support of National Recovery Month.
"Cocaine Condor" tackles the political backstory of pop-culture touchstones such as "Narcos," "Cocaine Cowboys," and the "Freeway Rick Ross Contra-CIA Scandal."  Asserting truths far stranger than fiction, "Cocaine Condor" is an explicitly disturbing reveal.  With research impeccably sourced from congressional archives, major mainstream media outlets like the New York Times,  interviews from Michael Levine, the most decorated undercover agent in DEA history, as well as Douglas Valentine , a journalist who has interviewed more Federal drug agents than anyone, and Courtney Brown, Jr , the son of a Detroit kingpin, Chapter 4 of "American Dope" is a bust on propagated misinformation fed to the public for decades.
Focusing on "Operation Condor," the secret American program to support right wing political leaders south of the border and protect American business interests, "Cocaine Condor" explores how this effort resulted in a widespread flood of cheap drugs washing across the U.S. and causing the so-called "crack epidemic."
"All the conspiracy theories about the U.S. Government and illegal drugs are not only true, they are even worse than you can imagine," asserts Profit. "I decided to make the "Cocaine Condor" episode available for free viewing for a day on YouTube because I wanted everyone to have access to this information and Friday the 13 th seemed like the perfect date to drop this bomb of information. Just think about it, we might never have needed a National Recovery Month if these exploits had never happened! I'm extremely excited about the entire 'American Dope series. When completed, it will be an all-inclusive encyclopedia on the notorious history of drug trafficking in this nation."
"American Dope" launched with Chapter 1, "Cold War, Heroin Heat," a tale of corruption stretching from 1920's Shanghai through to the Vietnam War and onto the streets of New York, circa 1970. Profit uncovers how the U.S. Government allowed Asian and European criminal syndicates to ravage the American population with heroin in exchange for supporting capitalism.
Chapter 2, "Acid Dreams," is a 'trip' to the 1950's and 60's when all across the country, from Harvard to Hollywood, people were experimenting with hallucinogens. This serious tell-tale probes LSD, MK-Ultra, Timothy Leary and the rise of the hippie counterculture.
Chapter 3, "White Powder, Black Power," investigates when the illegal drug economy was one of the most viable capital building tools for African Americans. Similar to the Italians, Irish and Jewish mob families that made fortunes during Prohibition, Black gangsters and their families went from rags to riches with often violent returns on their investments.
A Detroit native and graduate of the University of Michigan, Al Profit holds an M.A. in Economics and brings a distinctively disruptive perspective to investigative reporting. His YouTube channel,
www.youtube.com/alprofit , has a massive cult following and is a heavily visited hub for his many volatile works, which include short, medium, and full-length documentaries and his no holds barred commentary content on crime, history, and politics.
"Cocaine Condor" premiered July at the Arena Cine Lounge in Hollywood, CA and will be available for international viewing and purchase on Amazon.com. Free viewing will be available all day Friday, September 13 at www.youtube.com/alprofit.
Al Profit's full-length documentaries, merchandise, including original artwork on canvas, snapbacks, and jackets, can be purchased at www. AmericanDope.com with signature American Dope apparel designed