By Breezy Says November 23, 2019
Lucky for us, Billboard-charting singer and songwriter Jill Senter is returning to the nightlife in the incredible New York Musical Revue “Celebrate The Moment” at The Laurie Beechman Theater.
Directed by Tony nominee and Theater World Award winner Walter Willison, who starred on Broadway in the Tony Award-winning musical “Grand Hotel,” the show features Jill and a company of talented performers bringing the Golden Age of New York cabaret into the present as they spotlight some of the best-known songs from The American Songbook, Broadway and films.
Jill Senter Continues Family Tradition of Chart-Topping Hits after the loss of her father, she wrote “Celebrate the Moment”, a top 10 hit in Australia which also debuted at #33 on Billboard’s Club Dance Songs chart in 2018. 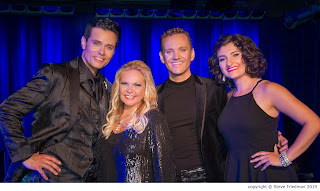 The international success of “Celebrate the Moment” inspired Jill to create this joyous, career-encompassing nightclub revue of the same name.
Written and arranged by Elliot Finkel, choreographed by Joanna Rush, and directed by Tony Nominee Walter Willison, the show debuted at the Laurie Beechman Theatre to rave reviews. Due to high demand, additional encore presentations are in the works.