Showing posts from December, 2018
Show all

This next artist coming out of Detroit, YUNG QUIS is making a lot of noise in the city this year. His video “Friends” which recently hit a million views on Worldstar and 90k on YouTube without any real promotion behind it is a Detroit favorite. Social Media: Instagram: @Ceoyungquis Twitter: @yungquisCeo Facebook: @yung quis
Read more

Reese Money - Self Made (Video)

[Audio] Maverick Hill - Man On A Mission (The Prohibition Mix)

Young Chief is an up and coming rap artist from the small town of Quincy, Florida located on the outskirts of Tallahassee, Florida. On his new single, HOW THE GAME GO, He’s speaking the truth of what's real amongst trial and error and explaining how you have to be determined to keep striving for the best!! Knowing that things might get hard and some people might throw rocks, you must keep going. They might hate, but we know how that shit go (DRAKE Voice)!! Check out this song and like share comment!! 💯🔥 #ricothechamp Click [ Here ] To Stream Single via Soundcloud Follow Young Chief on social media at: IG: __bossmandee Facebook: Da'Mond Johnson SC: djthabreadwinnaa
Read more

Newark, New Jersey native Profit, born David Garcia, learned early that nothing in life comes without struggle, and his struggles provide the basis for his artistic expression—rapping. Born September 23, 1986, Profit watched his single mother work hard to provide the best she could for him and his younger brother. When Profit was ten his mother moved the family to Tifton, Georgia—a drastic change from the Newark cityscape. However, small-town Tifton left Profit with some ambivalence. At the age of twelve he met his “brothers from another mother,”Jermaine and Jamal Miller, and together they tapped into their musical talents. The influences of their music came from Pastor Troy, No Limit Soldiers and Cash Money; although Profit feels that the emergence of T.I. greatly influenced him musically. “When T.I.P. came out that was the best rapper alive to me...I wasn’t trying to be a swagger-jacker, but if there was anybody that I idolized it would have to be T.I.” Meeting the boys was the hi
Read more

KK NOT KAY KAY teams up with JUCEE FROOT to deliver new visual "FUCC NIGGA", Directed by ForeignSkooly. Check it out below: Connect w/ the Team: @kk_notkaykay @iamjuceefroot Website: www.loyal100iam.com For Booking: dCfgmusiC@gmail.com or 7066179995
Read more

Darco Polo is originally from Poland, but staying in Amsterdam upcoming Electronic, Dance, House, Urban and Latin Music DeeJay/Producer. From a young age his passion and sense of music is lead him through multiple musical instruments and genres, which allowed him to evolve into a quite good prospering music machine. Now he has released his first House single, which is definitely worth a listen; press play and give it a try! Click [ Here ] To Stream via Spotify!! Connect w/ Darco Polo: Website: darcopolo.com Social media: Facebook: https://www.facebook.com/djdarcopolo Insta: https://www.instagram.com/djdarcopolo YT chanmel: https://www.youtube.com/%2Fc%2FDarcoPolo Soundcloud: https://soundcloud.com/djdarcopolo Micxloud: https://www.mixcloud.com/darco-polo
Read more 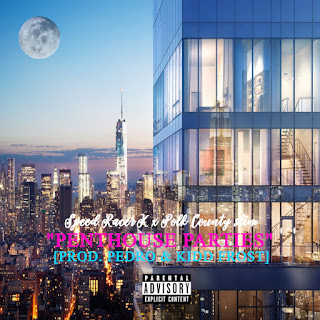 Change has come... Very rarely in the world of Hip Hop today do you encounter the best of all worlds. An artist with hit making ability, an image that is marketable yet honest and genuine, matched with sharp business savvy all wrapped in one. Recording artist SaleSe represents just that. And now more than ever, SaleSe feels the need to give the music business what it's been lacking: creativity, a fresh perspective, a reason to party and a dose of that New York City reality... After a slew of club performances from NYC to Florida, over 1000 appearances on various mix tapes, magazine features, blogs as well as a DVD circulating on the Internet with SaleSe battling it out cipher style with a younger Kanye West in addition to an IPhone full of industry contacts from A&R's to CEO's & DJ's galore, SaleSe is back in the booth with a vengeance, although he never really left... With a larger than life personality, an expensive taste for fashion (especially his trad
Read more

Bre Harris, more notably known by his stage name, BRE THE BUCKET HAT DON is a Miami native and artist from BrownSub. Some may recognize this Miami rapper by his former stage name, Boss Bre, which has recently been changed to BRE to represent His artistic and personal growth, he states that the name change “is representative of his transformation as an artist”, however Harris is in no way new to the music world in which he was born into. BRE's musical style and sound is truly distinctive; with musical influences such as: JT Money, Trick Daddy, Rick Ross, Notorious BIG, Jay Z and His Father Tommy D. Buy It On Itunes: https://itunes.apple.com/album/id1441686924?ls=1&app=itunes Stay Connected With Bre The Bucket Hat Don On Social Media: Instagram : www.instagram.com/Bre305 Facebook : https://www.facebook.com/profile.php?id=100025108899716 Listen to 'Freestyle Champ Vol.1 https://mymixtapez.com/album/192819
Read more

Who is Stylist Deja Alexis?

DEJA Deja is a wardrobe stylist based out of NYC. She knew she loved creating looks and dressing others while making their vision’s come true. She has been climbing her way up the fashion ladder and has worked with entertainers such as Mario and DC Young Fly. She assisted on shoots for brands such as Nicholas and Pola Thompson for fashion week. Deja wanted to continue her entrepreneurship path and she launched her online boutique, Fashion is My Chocolate® Boutique, where she continues to show her love for fashion and self expression. "It's a women's ready to wear that is versatile, eye-catching, and chic. I want my clothing to transition into my customers closets, creating new looks with versatile pieces that are also a statement". Connect with Deja Alexis: Facebook: Fashionismychocolateboutique Instagram: Fashionismychocolateboutique Website: dejaalexis.com
Read more

[Video] Young Quez - It Is What It Is (Shot by: @DJBruceBruce)

He's more focused than ever and this time it's major. Pine bluff, Arkansas "Young Quez" has released his new single "it is what it is" and has now added it the visual to "WSHH" gaining over 24k views in a matter of hours. The young star debut the video recently on his own YouTube channel where he has over 2k subscribers. The artist has saw a sky rocket in streams gaining over 4k monthly listeners on spotify in October. The artist is set to announce his debut album later next year while his mixtape "January 16th Reloaded" hosted by Bigga Rankin" is still soaring on all digital platforms. Stay tuned in with this new artist as he gears for take off 2019. Get Connected With Young Quez On Social Media: Instagram:  www.instagram.com/ therealyoungquez Facebook:  www.facebook.com/ therealyoungquez Twitter:  www.twitter.com/ therealyoungqu1
Read more