[Mixtape] C.Struggs – WHY NOT HUSTLE 2 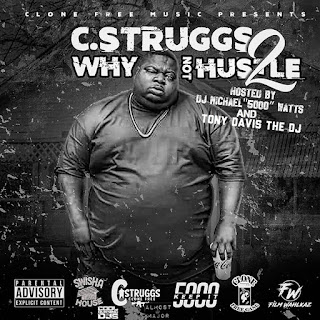 [Mixtape] C.Struggs – WHY NOT HUSTLE 2

Press play and listen to ‘Why Not Hustle 2’by C.Struggs! Hosted by DJ Michael “5000” Watts & Tony Davis The DJ. Struggs is a native rapper of Dallas has been rapping 7 years. Struggs was inspired to pursue rapping by firms label mates Corn and Serg. After dropping a slew of underground mixtapes in the Dallas circuit he caught the eyes of former Dallas native Demarcus Love and began dropping a slew of projects including, Da Transition, Still in Da Streets and Why Not Hustle!

With highly anticipated mixtape Da Fat Crip dropping soon, Struggs has become an underground superstar! Several media outlets consider him the number 2 rapper in Dallas; with hit singles Do it ft Rick Ross and Let’s Go to Jesus. Why Not Hustle gained national attention and had been listed in wiki top 30 rappers to explode in 2017! Struggs is a member of the Clonefree Music Group that featured labelmates Smitty Yteezy Shoose Blessed Sinner Spiffy skeebo. After a heavy 2016 campaign, Struggs has become the underground rap scenes most fast-rising artist! @cstruggsgmg @clonefreemusic @DJMichaelWatts @tonydavisthedj2day